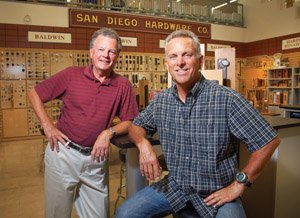 San Diego Hardware has now been in business for 120 years, and operators of the Kearny Mesa retailing stalwart point to a key decision made in the late 1990s that helped ensure its longevity into yet another new century.

That’s when the company — with a history dating back to its 1892 start in downtown San Diego — set up its online business, HardwareSource.com. The website has since become a crucial source of sales growth for the often hard-to-find items that the store sells to homeowners and builders, including 3,800 types of hinges.

“The main thing about the website is that it expanded our market to the entire United States,” said co-owner Rip Fleming, noting that the online side of the privately held business has consistently seen 10 to 20 percent revenue growth annually for the past several years.

Fleming, who co-owns San Diego Hardware with Bill Haynsworth, a fourth-generation descendant of the original operators, said the multichannel approach has been key to establishing the store’s current focus on items geared to owners of upscale homes, and helped it survive numerous economic downturns over the years.

“People might be doing a project at home where they’re putting in a gate that weighs 400 pounds, and they want to know what hinge would be able to hold that weight,” Fleming said. He added the company is now exploring ways to let customers look up product information with their smartphones while visiting the store, by entering codes posted on shelves.

Mastering multiple selling and distribution channels is becoming increasingly crucial to retailers big and small. The consulting firm Deloitte recently predicted that the percentage of U.S. retail sales generated online will rise from its current 9 percent to 37 percent by 2017.

Today’s reality, according to retail experts at the property brokerage firm Jones Lang LaSalle, is that the consumer shopping experience is no longer just a choice between buying at a brick-and-mortar store or from a retailer’s e-commerce site.

Advancing online and mobile technologies are enabling numerous combinations of offline and digital shopping. Some people now order items online and pick them up at a store, while others visit the store and order online at a kiosk. Items can be ordered to be shipped directly to the buyer’s home, or shipped to the store to be picked up on a future visit.

“Consumers are getting increasingly sophisticated and don’t want to spend time with retailers that aren’t willing to be where they are, or do things in ways that fit in with their own lives,” said Craig Killman, a senior vice president with Jones Lang LaSalle.

For retailers like Jerome’s Furniture, a San Diego mainstay for nearly six decades, cross-channel marketing that deploys old and new media has become key to generating customer loyalty, and ultimately repeat-sales, over the long haul.

Jerome’s Furniture now has an active presence on Facebook and its social site rival Google+, as well as Twitter, Yelp and Pinterest. The retailer’s website has a link to the company’s blog, called Home, where staffers discuss the latest news and trends in areas including home design, reorganizing and remodeling.

There is also a monthly print edition of Home sent to customers who sign up to receive it, as well as regular emails telling customers about holiday and other social activities being held at the company’s stores.

“You can look at retailing as being transactional, but you can also look at it as establishing an ongoing relationship with consumers,” Jim Navarra said. “That is what we are trying to do — to give them ideas, keep them informed about things like design.”

“We have found that it helps in terms of keeping people thinking of us, and it helps with our repeat business, which is very important,” he added.

One of her businesses geared to beach hotel rentals on Mission Bay, which she advertised on prominent travel booking websites and search engines, brought her in contact with vacationers seeking pet-friendly accommodations.

Popular pet-oriented items she offered to her hotel guests — like bowls, tags and bandanas — ended up as merchandise in the new store. Some of those items were originally given as freebies to those who “liked” and “friended” her original hotel business on its Facebook page.

Combined with search engine optimization to put the business near the top of searches, the online approach has helped build a brand that will next be extended to a Pacific Beach restaurant, Patio on Lamont Street, which Champion-Cain plans to open in August. All three businesses will be linked via social media, targeting 3,000 Facebook friends among other like-minded consumers.

“Facebook was a big part of getting the Luv brand launched,” she said. “I didn’t have a PR representative at the start of all this. People like you on Facebook, they tell their own friends about you, and they send their friends links to our websites.”

JLL’s Killman said retailers that master social sites and search engines can not only boost the customer counts at their physical stores, but also hone their product and service offerings to target specific customer demographics.