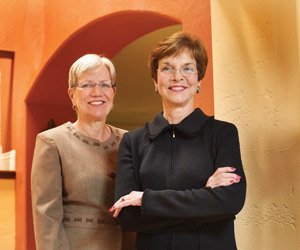 Karin Eastham, left, serves on the boards of Amylin Pharmaceuticals Inc., Illumina Inc. and Trius Therapeutics Inc., in addition to two biotechs outside of San Diego. Julia Brown, right, serves on the boards of Targacept Inc., and Biodel Inc. both based outside of San Diego. Both women agree that diversity on corporate boards leads to better decisions. Photo by Stephen Whalen.

Karin Eastham wants to bring something to company boardrooms: conflict.

Creative conflict, a clash of ideas and experiences, is a key part of effective policymaking. To fully tap that resource requires diversity, something Eastham has often found missing as she looks at boardrooms from her vantage point as the only female on three of the five boards of directors on which she serves.

“Diversity of any kind is positive on boards,” said Eastham, who serves on the boards of Amylin Pharmaceuticals Inc.; Illumina Inc.; Trius Therapeutics Inc.; and two biotechs outside San Diego at which she is the lone female board member.

“Board directors with diverse backgrounds provide more points of view and generate more ideas and better decisions,” she said.

Eastham is not surprised that a recent survey on gender diversity reported that of local companies who have a female board member 65 percent have only one woman member.

The local study was conducted by Carrie Stone, president of cStone and Associates, an executive search and leadership consulting firm. Stone said that a 2011 report by Catalyst, a nonprofit membership organization expanding opportunities for women and businesses, found 11 percent of Fortune 500 company boards did not include females.

Stone and other San Diegans interviewed for this article did not call for laws, such as those in Norway and several other European countries that establish quotas for female board representation.

“Gender alone should not qualify an individual to get on a board,” said Julia Brown, member of the boards of Targacept Inc. and Biodel Inc., both based outside San Diego.

Eastham is looking for companies to take the initiative. “I don't believe in quotas and mandates like we are seeing in Europe, but all companies should set goals to make meaningful changes over the next five years.”

For this article, nine companies with at least nine board members were contacted. Cytori Therapeutics Inc. and Leap Wireless International were the only companies that addressed board gender diversity issues before this article went to press.

Cytori has a “clear-cut” corporate governance policy that “diversity is the direction we want to go,” said Richard Hawkins, chairman of the board’s nominating and governance committee at Cytori. “It’s an issue that the committee discusses on a regular basis, and when we give a full report to the board, we talk about the need for diversity,” Hawkins said.

“Board members with diverse backgrounds better serve the company and the shareholders,” he said.

Hawkins added that Cytori’s board chairman, Lloyd H. Dean, an African-American, serves on the nominating and governance committee and realizes that ethnic, racial as well as gender diversity are important components of forming effective leadership teams.

In its 2011 annual report, Cytori stated, “The board has also determined that gender and ethnic diversity of the board will be an important factor in evaluation of candidates.”

Many other companies’ reports contain similar statements, a result in part of the Securities and Exchange Commission’s requirement that public corporations “disclose in their annual proxy if they have a diversity policy for board nominations,” Stone said.

A company spokesperson for Leap said, “At Leap, we believe in the power of diversity. We have built our Cricket brand by innovating value for a largely underserved customer base — people who are young, ethnically diverse and focused on value. For our company, embracing diversity and inclusion is a business imperative.” While none of Leap’s current directors are females, the spokesperson said women have previously served on the company’s board.

The San Diego public company with the highest percentage of female board directors, according to Stone’s survey, is LRAD Corp. Females make up 50 percent of the company’s four-member board.

Ranking second is Jack in the Box Inc. More than 33 percent of its board members are women.

With 30 percent of its board being women, Trius Therapeutics Inc. ranks third in Stone’s survey.

Identifying candidates for open positions often begins with defining the skill set that will add value to a board. The nominating committee may want the new director to “provide counsel and be an adviser to the company’s CEO,” said David Kabakoff, Trius Therapeutics board chairman and an executive partner at Sofinnova Ventures Inc.

“Independent folks who have been in the CEO seat” are ideal candidates for such positions. However, if the job description for the board position requires CEO experience, gender diversity may not occur because “there are not that many incumbent female CEOs,” Kabakoff said.

Not all board positions call for CEO experience, Eastham said. Chief financial officers and other senior management leaders who are “one level down” from the head position often are ideal candidates for such positions, she said.

“Board members are needed who bring value in different areas such as compensation, organizational development, succession-planning and talent acquisition. These board members add great value to compensation and nominating committees,” said Stone, of cStone and Associates.

Betsy Berkhemer-Credaire, president of the executive recruitment firm Berkhemer Clayton Inc. in Los Angeles, has interviewed 50 female board directors for a book she is writing as a guide for women seeking board positions.

“About 80 percent of them were recommended for the position by an individual who already was on the board. Many of these women came to the board’s attention through their nonprofit board work,” she said.

At a gathering for Athena San Diego, a nonprofit professional organization for women, and at other meetings, Kabakoff is often asked to reveal how to gain the attention needed to be considered for a board position.

“The answer is pretty simple,” Kabakoff said. “You have to be top of your game in your field. On top of being very competent at what you do, you should build solid relationships with various constituencies,” he said.

Stone said studies “show that the presence of diversity in the boardroom leads to more analysis and better preparation for board meetings.”

Both Eastham and Stone attended the 2012 Stanford Directors College conference at which Stanford University Graduate School of Business Professor Maggie Neale spoke about board diversity. According to Eastham, Neale said that the presence of diversity in age, gender and race increases our capacity to deal with conflict. Conflict changes the quality of preparation, increasing attention and involvement.

Cathy Yarbrough is a freelance writer for the San Diego Business Journal.