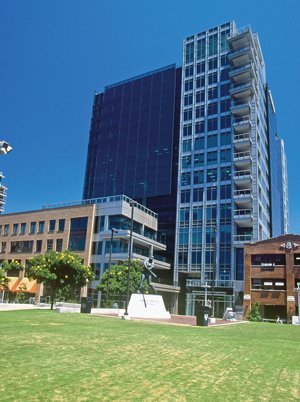 NOI: A company’s net operating income after operating expenses are deducted, but before income taxes and interest are deducted. London Group Realty Advisors based NOI on each property’s total assessed value for the 2011 tax year.

CAP RATE: Capitalization rate is a rate of return on a real estate investment property based on the expected income that the property will generate. Capitalization rate is used to estimate the investor’s potential return, dividing the income the property will generate by the total value. Based on recent market conditions, London Group’s income data for properties listed assumes a cap rate of 6.35 percent.

RBA: Rentable Building Area — Square footage in a building that is available for lease. Excludes areas such as corridors, stairwells and lobbies.

Which of the dozens of gleaming Class A office properties in San Diego County generate the best returns for the owners?

To answer this question, the San Diego Business Journal commissioned the The London Group Realty Advisors, a San Diego-based real estate consultancy, to conduct an exclusive research effort assessing the class A office properties in selected submarkets. Using data from the CoStar Group combined with other industry and public data, the London Group estimated the net operating income (NOI) of dozens of buildings in the region. From that list, it selected the top performers in the downtown, UTC, Carmel Valley and Mission Valley submarkets.

The top performers in each submarket by net operating income per square foot were:

These numbers are something of a surprise. As the top performing building, DiamondView Tower — while downtown — was not in the city center where many high-rise office towers are clustered. More importantly, the performance of the region’s leading Class A building reflects a unique locational relationship that reinforces the first rule of real estate: location, location, location. In this case, while the building’s location is somewhat off the beaten path, neighboring real estate in the form of Petco Park brings unique value that is reflected in the net operating income the building generates.

That the One Del Mar property in Carmel Valley ranked as the second highest performing Class A building in the region as measured by NOI/sq. ft., topping all downtown properties except for DiamondView Tower, is an indicator of the economic power of the region’s technology community which surrounds and extends out from the property’s High Bluff Road location.

Despite its East Village location on 10th Avenue — southeast of downtown’s core office district — DiamondView in 2011 had an estimated net operating income (NOI) per-square-foot $33.70, making it the leader of the pack when in a ranking of buildings by NOI/sq. ft. The building generates an estimated $10.2 million NOI, according to tax and other property data compiled by The London Group and CoStar Group.

DiamondView is owned by Wereldhave USA Inc., the American arm of Netherlands-based property investment firm Wereldhave NV. CBRE Senior Vice President Kraig Kristofferson, who handles office leasing for DiamondView, said operators would not be commenting on its financials because the property is now up for sale.

Details on prospective buyers were unavailable at press time. DiamondView was built in 2007 and is currently 95 percent occupied, with tenants including Cox Communications Inc., Comerica Inc. and Fit Athletic Club.

“It really benefits from the cachet of being right near Petco Park, and the uniqueness of the views of the ballpark,” said London Group President Gary London, whose firm did early feasibility studies for the project’s developers.

London said the tower has defied conventional wisdom that successful high-rises must reside in core business districts, aided by office tenants willing to pay premium rents for the view. In addition, the building’s top-floor skybox event space and other social areas are nearly fully booked throughout the year, regardless of whether it is baseball season.

Matt Carlson, senior director in the San Diego office of Cushman & Wakefield, who handles First Allied’s leasing, said rents and occupancy rates have been rising during the past two years, but most downtown properties have yet to see revenue return to pre-recession levels.

“That property currently gets the highest rents in the Del Mar Heights market,” said Tony Russell, an executive vice president with Jones Lang LaSalle who handles leasing at One Del Mar, built in 2001. “Also, the owner, Clarion Partners, is constantly making upgrades in energy and other efficiencies, which keeps operating costs low. That all helps to create a high NOI.”

In the past year, he said the property added two financial services firms and a health-care-related company to its tenant roster, and it continues to benefit from high demand among law firms and other financial services companies whose owners want to locate closer to employees’ homes in the Carmel Valley area.

As Russell noted, Class A properties have been attracting and retaining tenants by helping them keep overhead costs low with energy-efficient features, and by offering a value proposition for companies looking to move up in the marketplace.

In Mission Valley, the top NOI generator is Hazard Center Office Tower, built in 1990 and owned by Principal Financial Group. Its $18.51 NOI per square foot, and its 99 percent occupancy rate, can be traced to continued high demand among financial services companies in particular.

Demand remains high in Mission Valley despite an overall office stock that is older than some other submarkets.

“The Mission Valley market for a long time has been pretty stable — it hasn’t flown too high or too low,” La Dow said. 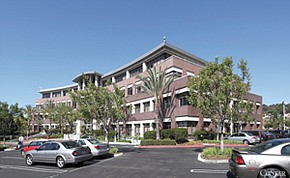 Newport Beach-based Irvine Co. does not discuss operational financials for its holdings. But John Turner, a regional vice president with Irvine Co., noted that it has been steadily upgrading its properties over the past five years to attract and retain tenants, including energy-efficiency upgrades and the addition of amenities like on-site restaurants and gyms.

“There are a fewer concessions than a year ago, and in some of our properties the rents have gone up,” Turner said. Full-floor space availabilities have recently become nearly nonexistent, and one upcoming available full-floor space in one of its UTC buildings is expected to fill up quickly.

Turner said the company is seeing progress in diversifying beyond the traditional financial services and legal-oriented firms that generally have dominated the tenant mix at UTC.