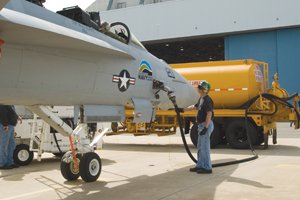 In 1907, President Theodore Roosevelt sent 16 U.S. Navy battleships around the world. The ships came to be known as the Great White Fleet.

A century later, President Barack Obama and Navy Secretary Ray Mabus are putting together a “Great Green Fleet.” Mabus has set a 2016 deadline to power a carrier strike group — the ships and aircraft that travel with an aircraft carrier — on alternative fuels.

Some of the scientific conversations behind the push are taking place in San Diego, home to the Navy’s largest concentration of ships.

Sapphire Energy Inc., based on Torrey Pines Mesa, is one company that’s part of the government’s research efforts — and one that plans to help the strike group go to sea. The 155-employee firm has hosted Navy and other U.S. Department of Defense officials for scientific discussions. “They’ve kicked the tires,” said Tim Zenk, the company’s vice president of corporate affairs. The private company has shared liters of its product with government scientists.

Sapphire is working to produce biofuel from algae. “San Diego is kind of ground zero in the algae space,” said Zenk. The firm has received $104.5 million in federal funds — including stimulus money as well as 2008 Farm Bill funding — as well as $100 million in venture capital. Sapphire is setting up a 100-acre algae refinery in New Mexico, with plans to expand that to 300 acres.

Also working to squeeze fuel out of algae is its neighbor General Atomics, which is working on the project with the Pentagon’s research and development arm, DARPA, the Defense Advanced Research Projects Agency.

They are not alone. Heather Kowalski of La Jolla-based Synthetic Genomics Inc. said by email that her company has briefed government officials about its biofuel research, but gave no additional details. Synthetic Genomics is investigating several types of fuels, and has been looking into algae-based fuel with Exxon Mobil Corp.

The military is asking for a “drop in” replacement for diesel or jet fuel. In other words, diesel engines or turbines would require no modification to use it.

SG Biofuels, based in Carmel Valley, is one of several companies working to breed jatropha — a nonedible plant that produces large, oily seeds. Oil from the plant is a suitable substitute for jet fuel, said Brian Brokowski, SG Biofuels’ vice president of communications. SG Biofuels received $17 million in series B funding in January; San Diego-based Life Technologies Corp. was one of the investors.

Both the U.S. Navy and U.S. Air Force have tried out biofuels. A biofuel-powered fighter jet, an F/A-18F Super Hornet, took off from a Maryland airfield and broke the sound barrier on Earth Day of 2010. The “Green Hornet” ran on a fifty-fifty mix of biofuel and conventional fuel, provided by Illinois-based UOP LLC, a business unit of defense contractor Honeywell International Inc. The biofuel was refined from the camelina plant.

The Air Force has flown an F-22 fighter at 1.5 times the speed of sound at 40,000 feet using a 50-50 blend of conventional jet fuel and camelina fuel. By now the Air Force has flown various aircraft on biofuel blends, including cargo aircraft and bombers. In October, the service tested biofuels in its high altitude Global Hawk spy aircraft. (Northrop Grumman Corp. has a significant number of San Diego employees working on the Global Hawk.)

Sapphire’s Zenk said biofuels are molecularly identical to petroleum-derived fuels. They usually have a lower freezing point and contain 3 percent to 4 percent more energy than their conventional counterparts.

Meanwhile, ship tests continue locally. Early this month, the frigate USS Ford made the trip from Washington state to San Diego, burning a 50-50 mix of algae-based fuel in its turbines.

During this summer’s Rim of the Pacific war games, sailors will refuel carrier-based aircraft with biofuel. Mabus, the Navy secretary, laid out the plan during recent remarks.

The idea of a Great Green Fleet has attracted critics from the right of the political spectrum. Former House Speaker Newt Gingrich recently called algae-derived fuel an “absurd” and expensive idea, with a price tag of $140 to $900 a barrel. Crude oil prices, by contrast, hovered in the $107 range last week.

Mabus has argued — and reiterated this month — that there is a need and a historical precedent for the U.S. Navy to take up green fuels.

The U.S. government has little control over the world’s oil supply, he said.

Over the years, he added, the Navy made transitions from sail to steam, from steam to diesel and from diesel to nuclear power. “At each of those transitions, there were those who questioned the need, challenged the cost or simply opposed change of any kind,” he said.