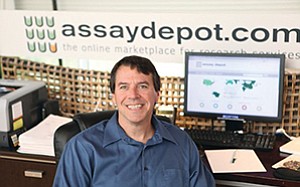 Making a drug used to fall to Big Pharma, costing a billion dollars and requiring resources and lab space to boot.

Today, a maturing marketplace of services and tools has placed the discovery stage of research into the hands of small and lean biotech companies.

Assay Depot Inc., a tech company in Solana Beach, has brought that marketplace to the Web on a platform that connects entrepreneurial scientists with contract research organizations, or CROs (often called vendors or research services). This online hub of resources may spawn the age of virtual pharma, and empower the little guys to do more with less.

Founded in 2008, Assay Depot still looks a bit like a tech startup with iMacs atop treadmill desks and a president and CEO sporting flip-flops and surfer hair. One arm down due to a collarbone break, Kevin Lustig’s enthusiasm is palpable as he works around his sling to demonstrate the online marketplace.

“It used to take 500 people to run a drug discovery program,” Lustig said. “Today, because of the network of contract research organizations, a single person can run an entire drug discovery project from their laptop while sitting at the beach.”

Lustig and his business partner, software developer Christopher Peterson, developed the fast-growing hub for research services to match companies with specific areas of expertise. The company amassed a database of 11,000 vendors in 1,400 research areas. About 398 of these vendors are in San Diego.

Scientists with an idea may not have the right technology or lab tools to advance their concepts. By signing up through Assay Depot, the researcher can set up a free account and search for contract services such as gene editing companies that create cell lines used to test drug compounds.

“If you’re an expert in chemistry, it makes sense to do chemistry inside,” Lustig said. “But for everything you need in biology and pharmacology, it doesn’t make sense to do it inside anymore. You would have to set up a vivarium, and a committee for animal safety. You’d have to buy the animals and house them. You would never do that. Biology is too big these days for any one lab. We outsource everything but the brilliance.”

The outsourcing model for drug research is not necessarily new. Many tools for drug discovery shifted out of the hands of Big Pharma in the early 2000s, prompting thousands of smaller contract research companies to pop up all over the world.

But there has never been an easy way to communicate and do e-commerce with them, Lustig said. He hopes the online marketplace will also “level the scientific playing field” by giving every scientist access to researchers in all areas of life science.

Big Pharma in the Game

Assay Depot has also caught the attention of Big Pharma, which sees value in using the system internally. Since 2010, Assay Depot has forged deals with two of the top 10 drug companies, including Pfizer Inc. and most recently AstraZeneca Plc, to license a private version of the online marketplace that keeps track of hundreds of research vendors used for smaller projects.

The private research exchanges are built for easy scanning; they include a five-star rating system and badges to help scientists quickly see if vendors are compliant with regulations, such as the Foreign Corrupt Practices Act, and if there are already service agreements in place with the company.

Assay Depot recently changed its model from subscription-based to a commission structure, taking 5 percent of all transactions made through the marketplace. Although Lustig declined to disclose revenues, he said that transaction volume has grown from about $6 million in 2013 to $20 million in 2014.

Big Pharma isn’t Assay Depot’s only game, though Lustig alluded to new pharma deals in the works. The company has also built a marketplace for 10 universities and research institutes in Missouri and Kansas, along with an online hub for the National Cancer Institute.

Lustig and his partner have raised a modest $7 million since 2007 to fund the company.

“I’m fairly well hooked into the VC community and I could have raised more money,” said Lustig, who raised more than $170 million for Kalypses Inc., a drug discovery company he founded in 2001.

This time around, he didn’t want to give up control to outside investors. “I learned my lesson,” he said. “We went into this with the idea that we raise as little as possible, not as much as possible.”

The company has 11 full-time employees and hires outside help for finance, legal expertise, graphic design and other specialties.