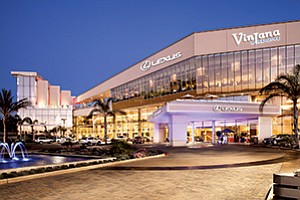 A Lexus dealership is at the heart of The Centre in Escondido, but the site also includes a restaurant, several retail shops and venues for business meetings and special events. The goal was to make shopping for a car a unique experience. Photo by Drew Davis

Not everyone was quick to understand how a Lexus dealership, a restaurant and several retail shops could succeed as part of the same complex, but time has proven that owner Judy Jones-Cone’s idea for The Centre in Escondido was sound.

“I believe Judy is quite a visionary,” said Deborah Scott, executive chef and partner of the Cohn Restaurant Group. “Her plan all along was not to make it a dealership, but a center. That was a brilliant idea.”

The Centre is located on Auto Park Way near Interstate 15. The Lexus dealership opened in December 2009, said Drew Davis, general manager of The Centre. The Cohn group opened the Vintana restaurant on the third level in 2012.

Jones-Cone said The Centre was designed to make shopping for a car a unique experience.

“We are trying to have a synergy that creates an interesting destination,” she said. “That is where other dealerships can fall short, by making the servicing and maintenance of your vehicle uninspiring and inconvenient.”

At 326,000-square-feet, The Centre offers venues and spaces for business meetings, weddings, and special events. The project cost in excess of $35 million to build, Davis said. It was designed by Whitfield Associates, Inc. of Dana Point. Kunzik & Sara Construction, Inc. of San Marcos was the builder.

The Centre is an open and airy structure. “We describe it as a modern design, with a lot of glass and metal elements,” Davis said. “We aimed at making it energy-efficient and sustainable.”

The third level includes 20,000 square feet of deck space for special events. Vintana seats 222 for lunch and dinner. It features 17-foot-high windows to take advantage of a view of mountains and the surrounding valley.

“You can see Vintana from the ground floor because there is an atrium that goes up to the full height of the building,” Jones-Cone said. “You can stand in the waiting area of Vintana and see the cars on the showroom floor.”

Said Scott, “I don’t know of any other restaurants that are on top of a dealership. It is an absolutely gorgeous venue.”

Davis said the complex has seven meeting and event venues on the second and third levels. “Those are available for social events, nonprofit events, corporate meetings.”

Revenue from leasing out meeting space at The Centre doubled between 2013 and 2014, he said. “The community has embraced utilizing the facility.”

Inspired to be ‘a Pirate’

Jones-Cone said The Centre was inspired by “The Pirate Inside: Building a Challenger Brand Culture Within Yourself and Your Organization,” a book by Adam Morgan. Morgan believes businesses have to work very hard to change the status quo, Jones-Cone explained.

“His whole point was you had to do something dramatically different,” she said. “You had to turn your brand experience upside down in order to make a little bit of difference. You had to be a pirate, somebody who lives by their own rules.”

To develop a vision for The Centre, “I had to go through several phases of thinking,” Jones-Cone explained. “The idea evolved over time. I hired three or four different restaurant consultants to help me think through the process. It took three years to build the facility. I had to make a decision whether I would own and operate the restaurant or have someone else own and operate it.”

In the end, she partnered with Scott and the Cohn Restaurant Group. “I am the landlord,” she said.

Once she had her idea for The Centre, she needed to secure approvals from the City of Escondido.

“I had to get permits and approval for everything I did, so I had to bring my hopes and dreams to them.”

While she didn’t encounter strong opposition, it took time for the city and various permitting agencies to understand exactly what she had in mind.

“When you do something that is different, it takes a lot more patience,” she said. “It was a new idea. There were no precedents, so everyone had to rethink. We were challenged. I am grateful we all came to a consensus and were able to go forward.”

Rorie Johnston, CEO of the Escondido Chamber of Commerce, said The Centre has become an asset to the business community.

“It’s amazing,” she said. “It’s just dynamic. It’s a target business where you can entertain people of all ages. It definitely is an attraction to the 40-and-younger crowd. We are happy to have that.”

Jones-Cone isn’t through experimenting. She expects to make changes at The Centre as time passes. For example, she is thinking of increasing the number of outdoor musical performances.

At the front of the building, “we have a musical fountain with colored lights that dance to music,” she said. “We are working on a way to do a patriotic Fourth of July show.”

In addition to the Lexus dealership and Vintana, businesses at The Centre include:

The Lux Ave Boutique, a clothing and accessory store;

And a golfing simulator staffed by Austin Zech, a golf professional.

Davis said there are plans to expand a small cafe that serves patrons of the auto dealership. It will be called Culture Craft Coffee and Espresso.

A busy businesswoman, Jones-Cone doesn’t spend all her time at The Centre. In addition to that facility, she owns Toyota Carlsbad, Lexus Carlsbad, the Carlsbad Collision Center, and Try J Advertising.