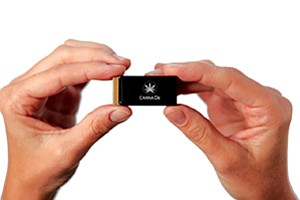 CDx Inc. has diagnostic devices for produce and medical marijuana. The company says it will develop a sensor for water and for air pollutants. Photo by CDx Inc.

Whether it’s worry over pesticide residue or concerns about toxins leaching into the soil, consumers want to know what’s in their food.

Food labeling and organic certifications have helped to ease consumer anxiety, but ultimately people have had to trust that regulatory agencies and food manufacturers have their best interests at heart — until now.

San Diego startup CDx Inc. is putting power in the hands of the individual with its latest consumer device called MyDx. Loosely translated, MyDx means “my diagnostic” — a way to test material for specific markers. The device is small enough to fit in your back pocket, and contains the power of a personal laboratory.

Simply punch a hole in a leaf of spinach or kale, pop the sample into the device drawer and wait as the mini lab begins to whir. Within three minutes, a full chemical profile will appear on your smartphone’s corresponding app.

The app lets consumers record notes about the food they test, keeping a log of the best quality foods at their local grocery stores.

Yazbeck said the company will focus first on accumulating a database of the “dirty dozen” — a list of foods with the highest pesticide residues such as peaches, celery and spinach.

The MyDx isn’t a single-indicator device. The technology uses more than one sensor, and each acts as an “electronic nose” looking for specific red flags. The latest sensor to test food for pesticide residue is called “Organa” and should be fully developed by the end of 2015.

Founded in 2013, CDx first developed the “Canna” sensor designed for patients to test the safety and potency of cannabis. Yazbeck, who has an advanced degree in medicinal chemistry, said the Canna sensor can detect the presence of important compounds in medical cannabis, such as THC and CBD, as well as providing a detailed chemical profile of any given sample.

As users log strains of cannabis, they also can share how the medicine affected their symptoms — creating a useful database pairing symptoms with strains of marijuana.

To date, 23 states, along with the District of Columbia, have legalized medical marijuana and two have legalized recreational use. The Washington Post recently reported that the industry could be worth $35 billion by 2020 if marijuana is legalized at the federal level.

Yazbeck, a former scientist for Pfizer Inc. and engineer for Panasonic Corp., said he recognized the growing financial opportunity for patients to know the chemical profile of their cannabis, as well as providing a database that tracks how each strain made them feel.

“We want the patients to track the strains that help them,” Yazbeck said, adding that consumers can search the CDx database for ailments such as epilepsy or pain, and the app will provide suggestions for specific strains that have helped relieve similar symptoms in other users.

Yazbeck said the app is HIPAA compliant, therefore patients must first choose to share their logged strain information to build the community database.

The business is a razor and blade model, selling the MyDx gadget for $699, and getting residual business from the disposable insert trays ($1.99) and sensors ($69).

In the Air Tomorrow?

Yazbeck said the company will be developing an “Aqua” sensor to test for impurities in water and an “Aero” sensor to measure pollutants in the air.

“I strongly believe that people want to know what people are putting into their body, and they want to trust and verify it themselves,” Yazbeck said. “People want to be empowered, and that’s what this tool does.”