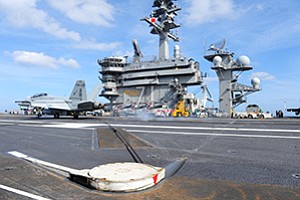 A jet lands on the flight deck of the USS Theodore Roosevelt. Photo by U.S. Navy

The aircraft carrier USS Theodore Roosevelt left Naval Station Norfolk, Va., on March 5 for a world deployment and then a trip to its new homeport of San Diego.

The change in homeport is part of a three-carrier shift involving the USS Ronald Reagan — which is leaving San Diego for Japan — and the USS George Washington.

The U.S. Navy said that the Roosevelt will support Operation Enduring Freedom in the Middle East, as well as unspecified maritime security operations and theater security cooperation efforts.

A single aircraft carrier brings 3,200 sailors into a community and contributes about $250 million annually in direct spending to its homeport, according to a recent study from the San Diego Military Advisory Council. When multiplier effects are taken into account, a carrier contributes about $486 million in economic impacts.