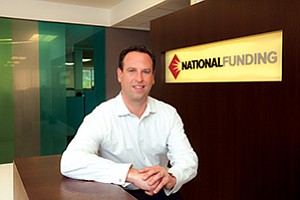 National Funding founder and CEO Dave Gilbert says the rapid growth of his financing company is allowing him to expand from small business loans into the midmarket segment. Photo by Melissa Jacobs.

When banks retreated from making small business loans during the depths of the Great Recession, Dave Gilbert saw a huge opportunity.

Gilbert, who ran an equipment leasing company in UTC as the founder and CEO, decided to move in and lend to entrepreneurs desperate to borrow to keep their businesses up and running.

It was a propitious decision.

Today, National Funding, Gilbert’s financial services company, has emerged as one of the leaders of the fast-growing area of nonbank, or alternative lending.

“After the market crash in 2008, we moved to fill the void left by the banks,” said Gilbert, “And we’ve had rapid growth since.”

Indeed, revenue grew fourfold, to $40 million in 2014 compared with $10.5 million in 2009 when he launched the lending side of his business.

And that rapid growth is expected to accelerate as the market for nonbank loans continues to soar.

Gilbert said he plans to push revenues to $70 million in 2015 based on what he expects to be $350 million in lending activities.

He’s even leased his entire building on Towne Centre Drive and is adding 17 employees by the end of April to achieve that goal.

National Funding has been able to gain traction making low-hassle loans to businesses with $1 million or less in sales for such purposes as working capital, equipment financing and merchant cash advances.

The average loan runs $35,000, and now he’s expanding into the midmarket category to make $250,000 to $1million in loans to businesses averaging $5 million in sales.

Willie Beeson, owner of Mission Aire Corp., an Orange County heating ventilation and air conditioning contractor, turned to National Funding two years ago after his bank declined to lend to his business.

“It ain’t cheap,” he said. “My loan is a little more expensive than might otherwise be at a bank, but I figure that it’s just part of the cost of doing business.”

The initial application can be done online in less than 30 minutes — compared with as much as 175 hours to fill out an application for a bank loan, said Gilbert, referring to one Federal Reserve Bank study.

Often one of the company’s underwriters will jump in to work with the customer to facilitate the process.

“A lot of people like to talk to a sales person,” he said. “When it comes to a very personal thing like borrowing money, they want to make sure they understand the details.”

“You can tell a lot about an applicant from social media, such factors as asset size and liabilities,” he said.

“They treat their personal credit very differently from their business credit,” Gilbert explained. “They’ll never bounce a check on their business account.”

Loans, which run six to 12 months, are repaid daily, rather than monthly — automatically deducted from the borrower’s checking account.

“The daily payments help us to more closely monitor the loans, and help the customer better manage their cash flow,” Gilbert said.

The current customer profile is an entrepreneur in his or her 40s, and scrambling to find the capital needed to continue.

“The profile represents about 90 percent of America’s small business — the heart of our business,” he said.

The company has negotiated more than $80 million in lines of credit from big banks that serve as the source of capital for the loans.

In addition to National Funding, Gilbert is co-founder of another lending firm Quick Bridge Funding in Irvine, which offers short-term loans to small businesses.

The Orange County Business Journal ranked the company No. 1 on its 2014 list of the Fastest Growing Privately Held Companies.

And he was named a finalist in the San Diego Business Journal’s 2013 Annual Most Admired CEO Awards.

Long term, Gilbert said he doesn’t expect banking to re-enter the market for those generating $1 million in sales, which offer more room for his growth.

“They’ve shifted to larger businesses because they can get better margins,” he said. “There is a tremendous awareness of the product now, which is something that did not exist five years ago.”

His customers come from all parts of the country as that awareness continues to grow.

“We were mostly in sales in geothermal and solar projects, but we recently got into installations,” he said. “We’re six to eight times the size of just a few years ago.

“As a result, we’ve run into cash shortages here and there, but National Funding has enabled me to borrow $60,000 on very short notice,” Moran said. “It’s been costly interestwise, but interest isn’t the only criteria. They got me money fast, and pretty easily, which is more important.”