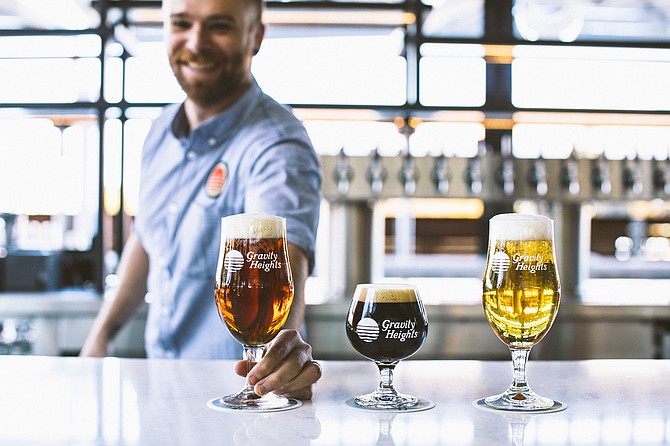 The company, founded in 2008 and with 207 employees across five concepts, recently opened its latest project: a food hall called Park Commons in Sorrento Valley’s The Park campus. While Whisknladle is privately held and wouldn’t share companywide revenue figures, Park Commons is expected to make approximately $3.5 million annually, according to Arturo Kassel, managing partner of the restaurant group.

“We had already taken an interest in the area with our Gravity Heights project,” said Kassel about the company’s brewery and restaurant concept, which opened in Sorrento Valley earlier this year. “We were approached by an area developer looking to provide an amenity for the Silicon Valleyesque business campus they were developing in what was formally known as the San Diego Tech Center.”

With 25 full-time employees, Park Commons opened its doors Nov. 11. At roughly 10,000 square feet of indoor and outdoor space and with the capacity to hold approximately 200 guests, it features five individual chef-driven food options, including Best Dressed Soup & Salads, El Parque Cocina Mexicana, DR. J’s Sandwiches & Such, Allspice Mediterranean Cuisine and Fricken Burgers. Additionally, Park Commons will house a full-service bar that will serve craft cocktails, wine and craft beer by the above mentioned and locally based Gravity Heights. A craft coffee shop that will sell Dark Horse Roasters coffee will be among the lineup, as well.

According to reports, food hall concepts across the United States have opened at an unprecedented speed the past five years. In fact, new data from Cushman & Wakefield’s latest food hall report predicts that at the current rate, the food hall marketplace will triple by next year.

In San Diego alone, there are a handful of other food halls throughout the county. In 2016, Liberty Public Market in Point Loma’s Liberty Station, opened. The 25,000 square foot venue hosts over 30 artisan and culinary concepts. Little Italy Food Hall opened summer 2018 with six Italian food-focused stations and a full bar. Carlsbad’s Windmill Food Hall opened a few weeks back and at 12,000 square feet, the dining and entertainment space has 14 vendors. Then there’s Pan y Sal, slated to open in a future date at Barrio Logan’s 40,000 square foot Bread and Salt art space and exhibit center.

According to data from Toast Restaurant Technology, 15% of restaurant owners name high operating and food costs as the biggest challenges to their overall success. Phil Lavoie, chief operating officer of real estate firm Gotham Organization, said in a Globest.com article published in January: “In additional to being viable business models for developers, food halls also present flexible and lower-cost rent options for restauranteurs.”

“The food hall trend reflects today’s society with both more social settings and more choices,” said Winston. “These are demanded by consumers who want what they want, when they want it. It also creates a real buzz within the establishments. Food halls are also just less expensive to develop.”

For Kassel, the above-mentioned stat is exactly what has been the hardest part of running his business… and what inspired him to open a food hall as opposed to a traditional restaurant this time around.

“We’ve faced various challenges over the years,” he said, “the hardest of which is the one were facing now… the balancing ways to mitigate the impact of rapidly rising costs while preserving value for our guests and doing so without sacrificing our ideals regarding food, service and hospitality.”

Still, Kassel said the company has had steady and consistent growth in opening seven restaurants the last 13 years or so. He credits his team and business partners, Ryan Johnston (culinary director) and David Sui Balanson (chief operating officer) for their dedication, passion and professionalism, which he said is what’s helped make Whisknladle successful.

Kassel said Whisknladle bootstrapped and self-funded its first five projects (three of which were PrepKitchens, opened from 2009-2012 and sold to a Las Vegas-based hospitality group in 2018), and turned to outside capital for Gravity Heights and Park Commons. He said he is inspired by people and trends, especially San Diego-based restaurateurs and chefs that have worked to elevate the local dining scene over the last 10 years. “We’re just proud to be a part of that movement,” he said.

In 2020, Kassel said he and his team will take some time to catch their collective breaths and determine the direction in which the company wants to go in the near future. No matter what that may be, the change in consumer behavior and culinary climate and the hardships Whisknladle might face, Kassel said the mission will always remain the same.

“The vision for Whisknladle along with the partnership between Ryan and I has evolved over time,” he said, “but always very much guided from the very beginning by a shared belief in the importance of delicious food, exceptional service and genuine hospitality as the foundation of any great restaurant.”