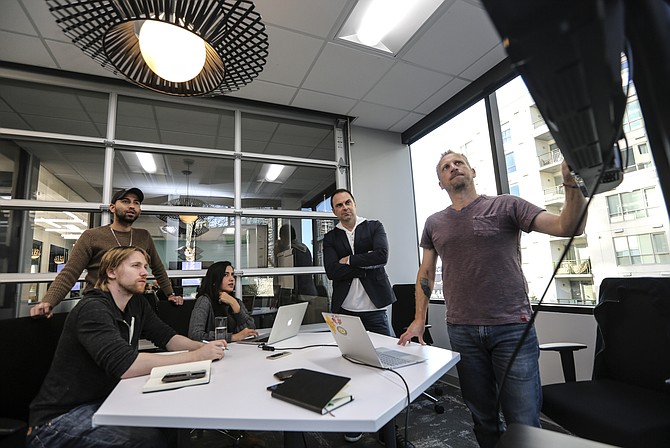 A team from Mercato works through a challenge earlier in 2019. File photo by Jamie Scott Lytle.

The deals, announced in late November, bring the number of million-dollar investments by TCA’s San Diego chapter to four. TCA-SD’s other seven-figure investments have been in DTx Pharma and Atlazo.

All of the deals were led by TCA-SD’s new annual Angel Capital Entrepreneur Fund, abbreviated ACE.

“When TCA invests in a company, our annual fund leads with up to $500,000, followed by individual investments by our members,” said Dean Rosenberg, TCA-SD president and ACE fund manager. The latest annual fund, ACE Fund 20, closed in October with $3.7 million to be invested by the end of 2020.

Groceries on the Go

Mercato is a software-as-a-service e-commerce platform for independent grocers that moved from New York City to San Diego early this year. It facilitates orders and deliveries for specialty food purveyors such as cheese shops, bakeries and butchers. Mercato previously announced $3 million in funding for this round from investors such as Greycroft, Loeb.NYC, Blackbird Ventures and Correlation Ventures. TCA’s participation brings Mercato’s total round to more than $4 million.

“It’s great having a San Diego investor that operates at the level of a top venture capitalist offering smart money to fuel our growth,” Mercato CEO Bobby Brannigan said in a statement distributed by TCA-SD. The CEO added that the investors contributed both in terms of capital and connections.

Discover Echo, which sells next-generation microscopes to pharmaceutical companies and academic institutions, raised its third round of funding from TCA, bringing its total from the group to over $4 million out of over $15 million in historical funding. Discover Echo first raised its seed round led by TCA after the company won the 2016 Quick Pitch competition organized by TCA at Qualcomm.

Tech Coast Angels’ San Diego chapter has invested a total of more than $12 million so far in 2019.

In a statement, Rosenberg said that the TCA annual fund is a success because it provides entrepreneurs with fast money and investors with capital-efficient diversification.

Ashok Kamal, TCA-SD’s executive director, added, “Keep in mind that ACE is an annual fund model — raising and deploying fresh capital to early stage companies each year. Therefore, a $4 million annual fund is like having another $40M early-stage VC in San Diego, and those don’t grow on truffula trees.”

The allusion is to the tree at the center of “The Lorax,” by Dr. Seuss.

The latest ACE Fund investments are for both new and existing TCA portfolio companies.