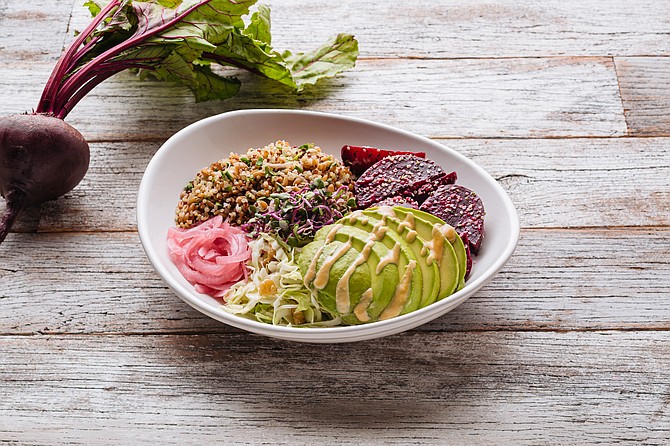 Since launching its selection of plant-based bowls in all San Diego County locations early November, Encinitas-based Urban Plates, a chef-driven, fast-casual restaurant chain with 18 eateries and three in San Diego County, has seen a 14% increase year-to-date in sales of plant-based menu items. Now, the company, founded in 2011 and with 890 local employees, has announced its plans to launch its plant-based options in locations nationwide in 2020.

“Naturally, vegetarian and vegan dishes have been on the menu since we launched. That said, we’ve noticed an uptick in consumer requests for additional plant-based options, particularly within the last year or so,” said Urban Plates co-founder and CEO Saad Nadhir; said the company commissioned a market research study in the fall to learn more about what its guests were looking for food-wise in the coming year to be better informed. “As with any new dish, our culinary team began the R&D process, recipe testing and related homework and developed a fresh selection of nutritious and satisfying bowls that are also vegan, gluten-free and, of course, delicious.”

At $9 each, bowls include beets and avocado, chickpea and sweet potato and poblano and roasted corn. Nadhir attributes the growth in the sales of plant-based dishes the past year to a number of factors.

“I think today’s consumers, and the Urban Plates guests in particular, are savvy: they understand the importance of getting away from processed foods, eating more vegetables and making positive health and lifestyle choices,” he said. “I think this also dovetails a trend we’ve been seeing in which consumers are considering flexitarian diets, (e.g.) ‘meatless’ Mondays, and the impact our food choices have on the environment… Everyone’s on their own unique food journey and we want to ensure Urban Plates is ready to meet its guests wherever they are.”

JoJo Ruiz, executive chef of the Pendry San Diego’s Lionfish restaurant, which sells plant-based items on its menu, said Urban Plates is clever for being more intentional about its plant-based offerings.

“Plant based foods are great,” he said. “It’s not just a movement but a conscious healthy decision. I think providing plant-based meals is important to not only our bodies, but to the Earth. People automatically assume they need to have a protein-based meal three times a day but replacing the protein with vegetables and fruits is going to help in the long run. There are a lot of plant-based foods that are good if they are sourced correctly and eating with the seasons is very important. It’s going to taste better and be packed with more nutritional value.”

A Taste for Adventure

Ruiz said the growth in the local plant-based trend is not only as a result of people having more of an understanding and knowledge of plant-based diets, but also because people have become more open to eating plant-based. He adds that a lot of local restaurants, including Café Gratitude, have done really commendable jobs with their plant-based offerings, which has encouraged San Diego residents and visitors alike to be more comfortable about exploring the option.

Data backs Ruiz’s theory. According to a September 2019 report on the Food Business News website, with more plant-based options out there, “there’s greater opportunity for consumers to substitute without sacrifice. Plant-based burger sales at quick-service restaurants, for example, are up 10% from last year… the strong year-over-year growth primarily is due to increased availability generating trial on the part of beef burger buyers, who make an average of 18 beef burger purchases and 2 plant-based burger purchases per year, according to data from The NPD Group. Taken from a different angle, the data show only 5% of plant-based burger buyers avoid meat entirely.”

Nadhir said Urban Plates’ commitment to scratch cooking using unprocessed, whole, clean and ethically sourced ingredients was also a motivating factor for the company to place more focus on plant-based foods. He said, unlike some popular meat substitutes, the plant-based items at Urban Plates can be trusted as foods that are good for the body and, when done right, good for the world.

“We’re still learning about popular meat substitutes that have come to market recently,” he said. “Thus far, we’ve shied away from so-called impossible meats because they’re highly processed, which runs contrary to our culinary sensibilities. Some have said that impossible meats are nothing short of Velveeta for vegans because they’re highly processed, use binders and additives, and are formed in factories. Urban Plates may not go that far, but we’ve just never seen the point of taking something natural and healthy and wringing the goodness out of it in a factory. Our plant-based bowls are made with natural ingredients in the restaurant, are nutritious and delicious with no factories, processing or funny business.”

Nadhir said all of the Urban Plates are prepared in-house with quality ingredients that are sourced from farms and purveyors that its head of culinary, Jim Cannon, has personally vetted and trusts. He also said the restaurant recently opened a location in Manhattan Beach and a Long Beach restaurant will be opening this December. In 2020, Nadhir said Urban Plates will open locations in major markets such as California, Maryland, Chicago and more.