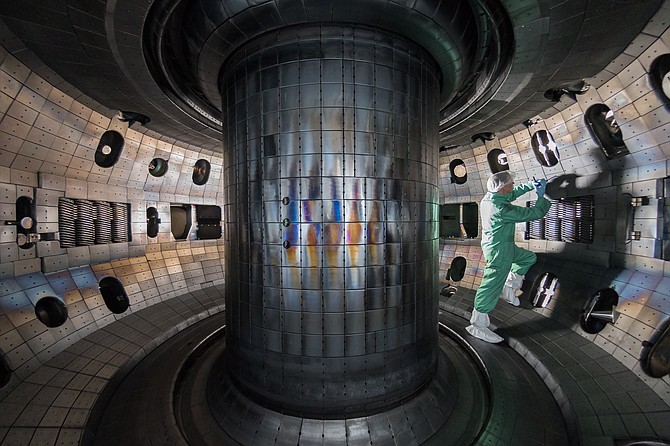 A technician at right shows the size of the chamber where GA creates a magnetic field and nuclear fusion. Photo courtesy of General Atomics.

General Atomics is getting five more years of federal funding to operate its experimental nuclear fusion reactor in Sorrento Valley.

Privately held GA and its partner, the U.S. Department of Energy, finalized a new cooperative agreement to run the reactor through 2024, the San Diego business announced in November.

Financial terms of the deal are not available. Funding will depend on annual appropriations from Congress. The federal government authorized $121.5 million for the project in 2019. Funds went to GA and collaborating institutions.

Researchers from more than 40 universities and 100 institutions conduct experiments at the reactor, called the D III-D National Fusion Facility (the combination of letters and a Roman numeral is pronounced D Three D). It is the largest magnetic fusion reactor in the United States.

“ D III-D has been the source of many important discoveries in fusion science, and GA is proud to have played a key role in achieving them,” said David Hill, Director of DIII-D, in a statement issued by the company. “We look forward to continuing our research toward making fusion energy a practical reality.”

For brief moments, the reactor can generate energy via nuclear fusion.

Conventional nuclear reactors (including the now-closed San Onofre Nuclear Generating Station) split heavy elements apart to create energy. By contrast, the Sorrento Valley reactor combines light elements at high temperatures and pressures to create heavier elements — and energy. The fusion reactor of the future is expected to use hydrogen isotopes such as deuterium (which has a neutron and a proton at its nucleus) and tritium (which has two neutrons and a proton). These fuse into heavier elements such as helium.

The reactions take place in an extremely hot plasma, which is confined to the interior of a powerful magnetic field shaped like a doughnut. The vacuum chamber where researchers create the magnetic field is known as a tokamak.

GA says the reactor is inherently safe: any loss of control causes the plasma to touch the inside wall, immediately cooling it and stopping the fusion reaction.

In a separate effort, General Atomics is doing key structural work on a larger experimental fusion reactor called ITER, which is being built in France. The company is assembling components of a 59-foot-tall central solenoid (the core of an electromagnet) under a $200 million contract from the Department of Energy. That effort is taking place in a Poway industrial park.

In May, General Atomics concluded an 11-month process of upgrading of the D III-D with new technological gear.

“ DOE’s renewal of this cooperative agreement is a clear sign that D III-D remains in the vanguard of research in the U.S. fusion community,” said Jeff Quintenz, senior vice president of GA’s Energy Group, in a statement distributed by GA. “This agreement provides the resources and support necessary to ensure that D III-D maintains a vibrant, productive and extremely collaborative environment. We’re proud to continue our partnership with the DOE Office of Science.”

General Atomics is privately held and does not release its revenue.

It has several other businesses in addition to nuclear power. It is the company behind the Predator and Reaper family of remotely piloted aircraft, flown by the U.S. military and U.S. allies. An affiliated company, General Atomics Aeronautical Systems Inc., builds the aircraft in Poway.