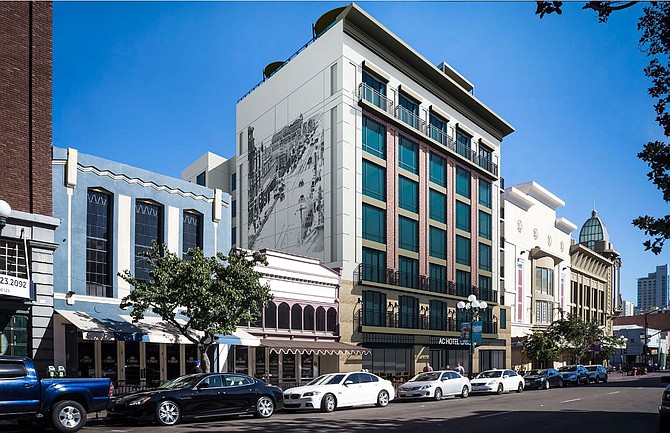 A hotel developer based in New Jersey is building its first West Coast project in downtown San Diego’s Gaslamp Quarter.

The project by The Briad Group also brings to San Diego County the first AC Hotels by Marriott branded hotel.

“All of our hotels are in the Northeast. This was a good opportunity for us to step into a very high-barrier market for this type of hotel,” said Steve Scharf, senior vice president of hotel development and asset management for The Briad Group, headquartered in Livingston, New Jersey.

Scharf said the company chose San Diego for its entry into the West Coast market because “the occupancies in the city of San Diego are some of the highest in the country.”

“Our competitors in this market are running over 80 percent occupancy annually,” Scharf said. “It’s pretty unusual. The rooms are selling out probably five nights a week, maybe more.”

Most other urban hotel markets have annual occupancy rates from the low to mid-70 percent, Scharf said.

According to the San Diego Tourism Authority, occupancy rates for Central San Diego have reached 84 percent.

The 147-room hotel AC by Marriott is going up on the site of what used to be a TGI Fridays’ restaurant and McFadden’s Restaurant & Saloon, both of which were razed to make room for the hotel at 743 Fifth Ave.

“We’ve owned this site for probably 10 years, maybe a little bit more. It’s always been with us as T.G.I.Fridays restaurant and nightclub above,” Scharf said. “We kind of looked at the zoning on the site and realized we had the ability to put more density on the site.”

Heart of the Gaslamp Quarter

Located in the heart of the Gaslamp Quarter, the site also was ideal for a hotel.

“That’s where the demand is. We’re five blocks from the convention center, that Gaslamp Quarter is where all entertainment and restaurants are,” Scharf said, adding that the site also is close to the downtown business district.

Aster Construction Services Inc. is the general contractor on the seven-story hotel

Aster previously transformed what had been a Pacific and Reading Cinema next to the hotel site into Theatre Box, an entertainment and dining venue that includes Sugar Factory American Brasserie, a Chocolate Lounge and a TCL Chinese Theatre Box with eight dine-in screening rooms.

The AC Hotels by Marriott brand was named for Antonio Catalan, who founded AC Hotels in Spain in 1998. 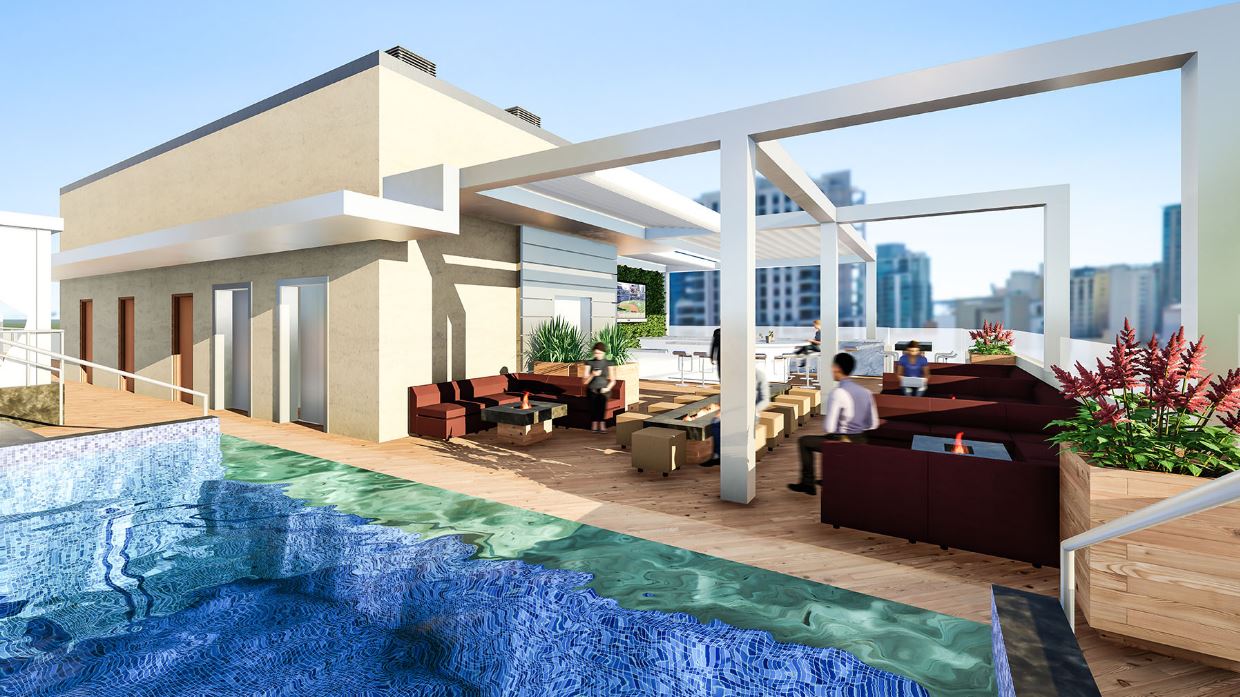 Plans call for a rooftop restaurant. Renderings courtesy of The Briad Group.

The AC Marriott brand is a cross between Marriott’s traditional hotels and its hipper Moxy brand which was introduced to San Diego just a few steps away at 831 Sixth Ave.

With a color scheme that’s predominantly silver, black and brown, the new AC Marriott in San Diego is “a little more muted in color than some of the hotels that we have throughout the country,” Scharf said. “We think it’s different. There’s a lot of hotels that kind of look alike these days.”

The target market is business and leisure travelers “that are looking for something a little more stylish, not just your typical room like everywhere else,” Scharf said. “We like to say it’s people who are trendsetters looking for a design oriented hotel. It’s probably going to be business travelers and conventioneers during the week and people who like to have a good time during weekends.”

Room rates won’t be set until the hotel is closer to opening Scharf said.

In keeping with its origins, the San Diego hotel was designed with a European flair by Tucker Sadler Architects with headquarters in downtown San Diego.

As outlined by the architects, the Fifth Avenue side of the hotel will have balconies with decorative metal railings and a steel canopy with lighted signs.

The main lobby will open up onto Fifth Avenue.

Plans also call for a rooftop restaurant — The Bradford Fine Spirits and Tapas — a fitness center that will be open round-the-clock, a first floor speakeasy called Love Story and a rooftop bard with an outdoor pool and cabanas.

In addition to the San Diego AC Hotel by Marriott, The Briad Group plans to open 10 other Marriott and Hilton branded hotels over the next three years.

“It’s an exciting time for Briad as we experience explosive growth of our hotel divisions,” said Rick Barbrick, president and co-CEO of The Briad Group.

In San Diego, the Tourism Authority reported that 24 hotels could open in 2020 and 2021, although that could be tempered if an economic slowdown hits.