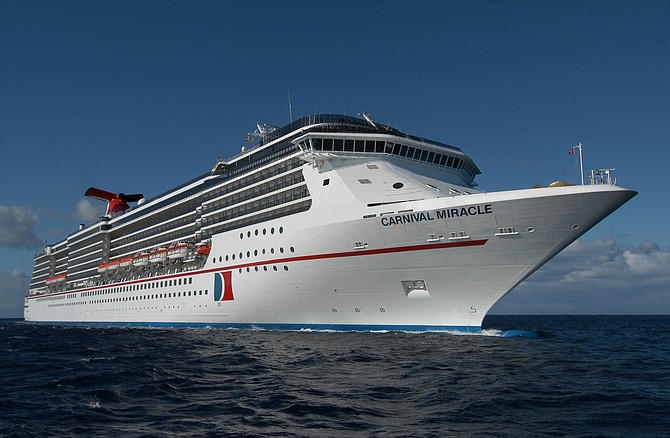 Seven years since it last departed from the Port of San Diego, Carnival Cruise Line launched its winter schedule abroad the Carnival Miracle the first weekend of December. According to Garry Bonelli, chairman of the Board of Port Commissioners, the Carnival Miracle will make 13 three to 15-day cruises this season with an economic impact of $2 million each.

“The Port of San Diego welcomes Carnival Cruise Line’s Miracle to our homeported lineup,” said Bonelli. “The Carnival Miracle will be making 13 cruises this season to the Mexican Riviera, Baja, Hawaii and the Panama Canal. Each one of these homeported cruises has an economic impact of $2 million on our region and supports jobs including retail, restaurant, lodging, transportation, ship agents, stevedoring, security and manpower services.” 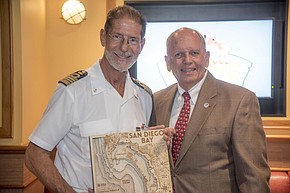 To welcome the inaugural visit of the Carnival Miracle to the Port of San Diego, Garry Bonelli, chairman of the Board of Port Commissioners, presented its captain with a plaque. Photo courtesy of Carnival Cruise Line.

Carnival Miracle’s San Diego-based schedules are part of the line’s West Coast expansion that also includes its first-ever program from San Francisco to Alaska, Hawaii and Baja Mexico. “San Diego is an integral component of Carnival’s ship deployment strategy in which the line positions ships near large U.S. population bases along the East and West Coasts and the Gulf of Mexico,” the company said. “Including San Diego, Carnival sails from 19 North American homeports providing a cost-effective means for guests to get to and from their cruise. It’s estimated that roughly half of the U.S. population is within a day’s drive of a Carnival homeport.”

“We’re delighted to return to the Port of San Diego to offer this diverse schedule of convenient and attractive voyages for our guests,” Stein said. “The West Coast is an important and fast-growing market for Carnival and these departures from San Diego provide guests a wide array of exciting cruise choices with stops along Baja Mexico, the Mexican Riviera and Hawaii.”

The schedule kicked off with a seven-day sailing to the Mexican Riviera, and will include other destinations and durations, like three-day weekend getaways to Ensenada; a four-day New Year’s Baja Mexico cruise featuring Catalina Island and Ensenada (departing Dec. 30); five-day trips that spend two days in Cabo San Lucas; a six-day cruise featuring two days in Cabo San Lucas and a day-long visit to Ensenada; and three longer-length Carnival Journeys voyages, which include 13-day Panama Canal sailing from San Diego to Miami and making stops in Mexico, Guatemala, Costa Rica and Colombia and 14-day and 15-day Hawaii cruises (departing Dec. 8 and Jan. 17, 2020).

Carnival Miracle’s San Diego-based schedule takes off at the same time as the Carnival Panorama out of Long Beach on Dec. 11, the company’s first new cruise ship in Southern California in 20 years, according to the release. The Carnival Miracle is scheduled to return to San Diego to operate another winter lineup in 2020-2021.