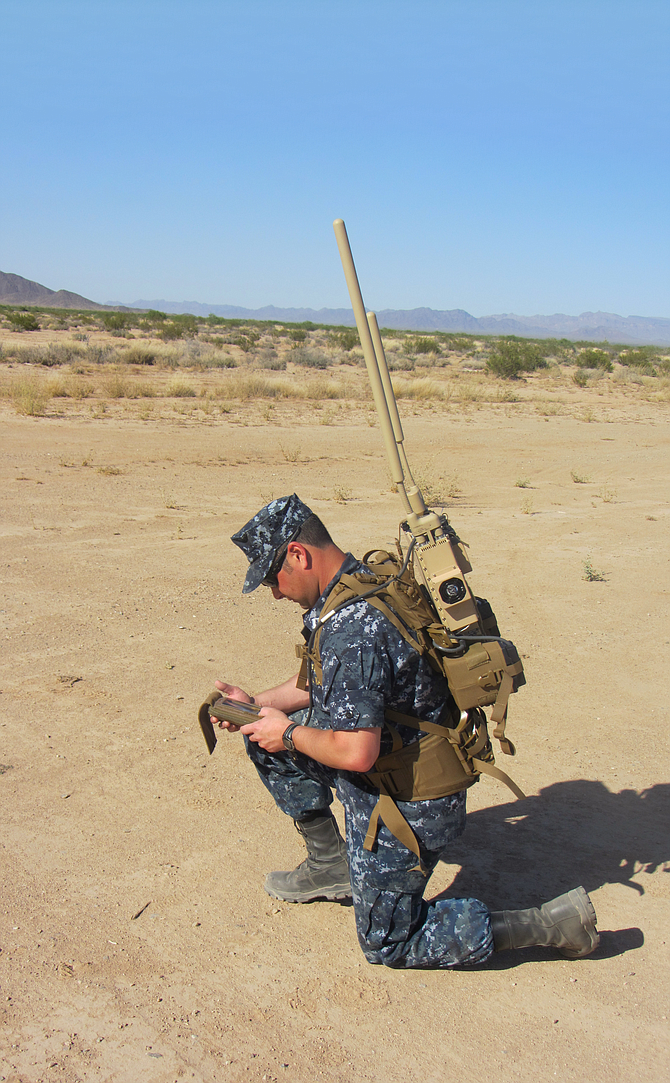 A U.S Navy sailor wears the JCREW signal jammer in 2014. Australia plans to buy as many as 850 JCREW units. Photo courtesy of U.S. Navy.

Northrop Grumman Corp. is lining up an overseas order for its battlefield signal jammers, which the company designs and builds in San Diego.

The government of Australia plans to buy up to 850 JCREW signal jammers. Troops use the electronics to defeat improvised explosive devices. The deal will be worth up to $245 million, according to a notice from the U.S. State Department, which announced its approval for the foreign military sale on Nov. 20.

The deal will include related equipment and support.

The sale has not yet been concluded and now needs congressional approval.

“While JCREW was initially developed to counter radio controlled improvised explosive devices, it does so as a counter communications system which can easily be applied to defeat other threats, such as drones,” said Roshan Roeder, vice president at Northrop Grumman’s Communications Center of Excellence in San Diego.

Radio-controlled toy drones have been rigged to deliver explosives.

-based Northrop Grumman employs 1,200 people at its Spectrum Center location in Kearny Mesa, where the JCREW systems are assembled. The corporation said it employs a total of roughly 6,000 people in the San Diego area.

JCREW was designed and developed in San Diego. The initials stand for Joint Counter Radio-Controlled Improvised Explosive Device Electronic Warfare. The version of the electronics that Australia plans to buy is called Increment 1 Block 1.

Specifically, Australia has been cleared to buy 533 vehicle mounted and 317 dismounted systems, for troops on foot. A photo of the system distributed by the Pentagon shows a sailor wearing the JCREW electronics in a manner similar to a backpack.

The JCREW jammers are not the only San Diego product Northrop Grumman is selling to Australia.

In a separate deal, the corporation is selling its high altitude, long endurance Triton unmanned aircraft to Australia. Northrop Grumman builds the aircraft in Palmdale, but employees in Rancho Bernardo design the Triton and manage the program.

In a deal announced in July of 2018, Australia plans to buy six Triton aircraft, which carry sensors to gather intelligence on the ocean and in near-ocean (littoral) areas.

The first aircraft is scheduled to go into service by mid-2023. All six are expected to be delivered and in operation by late 2025.

Triton is a variation of the Global Hawk unmanned aircraft, which Teledyne Ryan Aeronautical developed in San Diego.

Northrop Grumman was not the biggest beneficiary of foreign military sales contracts cleared by the State Department in the previous fiscal year, which ended Sept. 30.

In fiscal 2019, Northrop Grumman received clearance for $1.2 billion of sales, behind Lockheed Martin Corp. ($32 billion), Raytheon Co. ($15 billion), Boeing Co. ($9 billion) and General Dynamics Corp. ($3 billion). The numbers were attributed to Roman Schweizer, an analyst at Cowen Washington Research Group, and appeared in Defense News. The article noted that numbers approved by the State Department may not reflect numbers in the final sales.