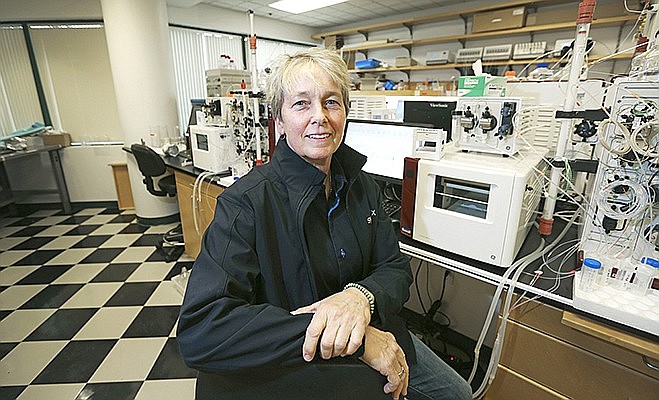 Laura Shawver, CEO of Synthorx, in the lab located in the incubator COI Pharmaceuticals. Synthorx was recently acquired in a $2.5 billion deal. Photo by Jamie Scott Lytle.

French pharmaceutical Sanofi will pay $2.5 billion to buy Synthorx, a San Diego biotech that expanded the genetic alphabet in a quest to treat various cancers, it was announced Dec. 9.

Sanofi said Synthorx could usher in a new type of oncology drugs.

“This acquisition fits perfectly with our strategy to build a portfolio of high-quality assets and to lead with innovation,” said Paul Hudson, CEO of Sanofi, in a statement.

Synthorx’s platform widens the genetic lexicon. The company adds an artificial DNA base pair — X-Y — to the DNA bases that naturally occur: A-C and G-T.

The process creates a special strain of bacteria at the core of THOR-707, Synthorx’s lead program which this summer started early-stage clinical testing in multiple cancers.

The company sprung out of Floyd Romesberg’s lab at San Diego-based Scripps Research.

In 2017, Scripps researchers and Synthorx published a paper in the journal Nature with a major achievement. They produced proteins in a cell by decoding a six-letter genetic alphabet, instead of just the natural four-letter alphabet, boosting confidence in the approach.

Sanofi said it would buy all outstanding shares of Synthorx common stock for $68 per share in cash — a 172% premium to Synthorx’s closing price on Dec. 6.

The companies said Synthorx’s programs could one day be effective as standalone drugs or be used in combination with Sanofi’s drug portfolio.

“Importantly, Sanofi has a portfolio of therapeutics that holds incredible promise for combining with our cytokine synthorins to benefit patients around the world,” Synthorx CEO Laura Shawver said in a statement.

The company declined to comment on the future of San Diego operations and Shawver’s role going forward.

Synthorx’s technology looks to tame what’s called Interleukin-2, or IL-2, by increasing cancer-fighting cells and cutting down on toxicity.

The IL-2 drug aldesleukin won approval in 1992 and was viewed as a breakthrough cancer therapy. But its toxicity can trigger life-threatening side effects.

In February, Shawver said Synthorx’s ability to tame IL-2 attracted her to the company. She was named CEO in late 2017.

“When I learned about how the Synthorx technology could reprogram IL-2 to keep the good and tune out the bad, I said, “Oh wow, this is a fantastic opportunity,” she said.

After the deal was announced, analyst Josh Schimmer with Evercore ISI said Synthorx’s precise protein engineering could also yield drugs for autoimmune disorders and other diseases.

Synthorx raised $151 million in a public offering last year, preceded by a $63 million Series C round.

The company was incubated at San Diego-based COI Pharmaceuticals, which houses portfolio companies of Avalon Ventures. Synthorx marks the third COI company to be acquired in as many months.

Merck & Co. last month bought Calporta Therapeutics for up to $576 million. Before that, GlaxoSmithKline purchased Sitari Pharmaceuticals, though terms have yet to be disclosed by GSK.

Jay Lichter, president and CEO of COI and the managing director of Avalon Ventures, said this is the largest Avalon-linked deal yet.