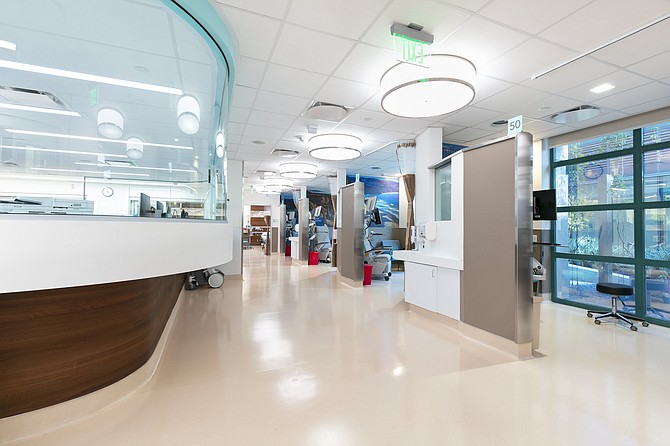 These architectural features jumped out during a tour of the Gary and Mary West Emergency Department at UC San Diego Health’s Jacobs Medical Center. Also noticeable were artworks of San Diego mainstays — such as sandstone La Jolla bluffs — meant to reorient patients. The absence of beeping machines also stood out in the hospital environment.

In a brightly lit hallway, nurses noted they assess new patients for everything from mobility to cognitive issues to medication history. The analyses extend to living situations, including looking for signs of elder abuse.

Senior screening and treatment protocols will soon be coming to more ERs in San Diego, in recognition of the aging population and payment models that put the onus on hospitals to prevent readmissions.

Under a pledge signed by regional hospital leaders on Dec. 9, a majority of San Diego hospitals will have accredited geriatric emergency departments by 2021.

The American College of Emergency Physicians, or ACEP, awards three levels of accreditations — at a minimum requiring special protocols and staff with geriatric training.

“We’re trying not only to treat patients, but understand the underlying cause of what brought them to the emergency room,” said Dr. Ted Chan, chair of the department of emergency medicine at UC San Diego Health.

Compared with other emergency rooms, early data on the senior wing showed a 12% decrease in patients returning to the unit in 30 days, and a 20% drop in hospital readmissions in that span, according to Chan.

Better care isn’t the only intent. Hospitals get dinged financially for high rates of readmissions.

“Part of what we’re trying to do is prove we can bend the cost curve,” said UC San Diego Health CEO Patty Maysent.

Philanthropists Gary and Mary West, who founded the nonprofit West Health, and the county are contributing $700,000 toward the regional ER effort.

In a news conference at Jacobs Medical Center in La Jolla, Gary West said geriatric emergency units on average save $8,750 per avoidable admission.

“If scaled nationally, what we’re doing here today could translate into $20 to $30 billion per year in avoidable hospital admission costs,” West said.

The Wests have committed $40 million to expanding senior-centric ERs around the country. More than 112 health systems have ACEP geriatric accreditation, with San Diego set to be the first county with a majority of hospitals holding the designation, potentially making the region a model.

West said even if hospitals aren’t in the position to construct new ERs or make structural upgrades, assessments for cognitive decline and other measures go a long way in improving senior care.

All four of Scripps Health’s emergency rooms will earn geriatric emergency accreditation by the end of next year. That will largely revolve around updated care protocols, with new buildings or architectural changes possible long term.

“This will standardize our work,” she said.

Highlighting the shift in emergency care, Norton cited the hypothetical example of an 85-year-old woman who comes to the emergency room with a broken wrist.

Traditionally, she might receive pain medication, an X-ray and a wrist splint — and then be discharged. But a geriatric emergency model calls for mobility tests and other screenings.

If not, case managers may be assigned to assist patients with post-hospital tasks.

Seniors make up a growing slice of ER visits, including those that resulted in admissions.

Six years earlier, they represented about 25% of total ER visits, according to data from California’s Office of Statewide Health Planning and Development.

A greater number of seniors are expected in ERs, if only because of sheer demographics.

“Most seniors live in the Metro region of the county and South Bay’s senior population is growing the fastest,” said Dan Gross, executive vice president of Sharp, in a statement.

“We are right in the middle of that growth, and we look forward to preparing our team members and facilities to meet this important need by the 2021 target date.”

County Board of Supervisors Chairwoman Dianne Jacob said at the news conference that the senior ER push dovetails with the county’s Aging Roadmap, a blueprint for meeting the needs of older adults in the region.