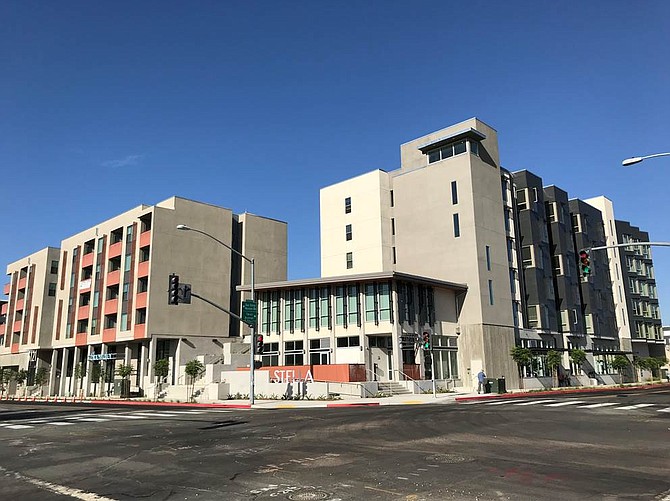 A pair of apartment projects that provide housing for veterans and people who were homeless or in danger of becoming homeless has opened in Grantville.

Built by Suffolk for Affirmed Housing, Stella and the adjoining Bluewater apartment building combined have 158 apartments for low-income families, low-income individuals and veterans.

“Now, more than ever, it is critical that we provide high quality housing that is affordable, attainable and honors the dignity of its residents,” said James Silverwood, president of Affirmed Housing.

The $29.2 million Stella at 4304 Twain Ave. has 79 apartments for people who have been homeless — 62 for individuals and 17 for veterans — and one apartment for a building manager.

The apartments are open to people with incomes up to 40 percent of the San Diego Area Median Income.

In Stella, the units range from 370 square-foot studios to 593 square foot one-bedroom apartments.

Bluewater — a $34.6 million dollar complex — has eight apartments earmarked for veterans who have been homeless and 71 apartments for families with incomes up to 60 percent of the median — $51,360 for a two-person household and $69,550 for a family of four. There’s also a manager’s apartment.

On-site social services will be provided at Stella by Interfaith Community Services and the Veterans Administration.

“At affirmed, we like to dream and think big,” said Jim Silverwood, president of Affirmed Housing.”

Bluewater and Stella “are the culmination of these two concepts,” Silverwood said.

Demand for affordable housing is so strong that people were moving into Stella while work was still under way on Bluewater, said Harez Rasoul, assistant project manager for Suffolk.

Timing was critical because tenants were lined up for the apartments in both projects ahead of their completion.

“Before we had even finished the project, they had a list of residents that were scheduled to occupy them so we could not miss a date,” Rasoul said.

Among the special features in Bluewater is a second level outdoor deck with a playground.

“It’s a nice little area for any of the residents to go there and hang out,” Rasoul said.

Although the buildings are separate, Rasoul said they share the same U-shaped site and amenities, such as parking and community outdoor gathering spaces.

Amenities at Bluewater and Stella include community kitchens and indoor and outdoor gathering spaces.

Based in Sabre Springs, Affirmed Housing has financed more than $1.4 billion in affording housing developments in 53 communities throughout California. Ongoing projects include The Link, an 85-apartment project in San Diego at 707 17th St. due for completion in late 2020.