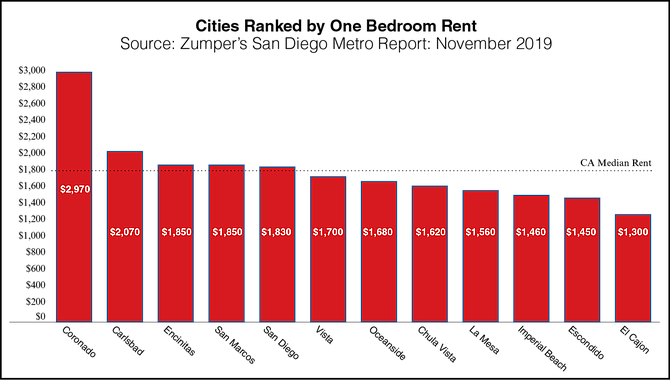 Good news for renters and homebuyers comes this month with word that rents have stabilized or dropped slightly in San Diego County while the price of existing homes rose by a modest 1 percent in November.

The Southern California Rental Housing Association reported that overall rents in San Diego County declined slightly for the first time in the past five years, with vacancy rates rising from 4.1% to 4.7%.

“In general, a vacancy rate of 5% is viewed as healthy for the San Diego market, indicating a reasonable supply of rental housing inventory, so this upward trend in vacancies is positive news,” the Rental Housing Association said in its Fall Rental Rate Survey. 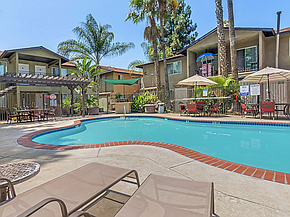 Renters finally got some relief as rents dipped for the first time in recent years. Photo courtesy of ACI Apartments.

Meanwhile, the Greater San Diego Association of Realtors reported that despite a decline in home sales in November, the median price of a single family home nosed up to $665,000, which the association reported was 5% higher than a year ago.

Condo and townhome prices rose to $431,350, which the Association of Realtors said was nearly 9% higher than a year ago and about 1.5% higher than in October.

“As we approach the end of the year, there’s still no sign that the economy is wavering,” said Kevin Burke, president of the Association of Realtors. “Mortgage rates are down more than a percent from where they were at this time last year, a good sign in spite of the lack of housing inventory.”

Historically, November has been a slow month for renting and buying residential property as fewer people move during the holiday season.

Reflecting that, the Association of Realtors reported that sales of existing single family homes dropped 13% from October to November and townhome sales were off 24% from October.

The most expensive home sold in October was a newly built Solana Beach home with ocean views and that went for $8.6 million.

On the rental side, the Rental Housing Association reported that the average monthly rental rate countywide among all apartment types was down 1.3% from its spring survey to $1,922 compared with $1,948 but up slightly from a year ago, when it was $1,915.

Zumper, an apartment listing service, had slightly different figures in its survey of rental rates in November, reporting that year-over-year rental rates were down in some cities within the county and up in others.

When it came to picking a new place to live, “overall, San Diego residents were still mostly interested in living within the San Diego metro area, though Los Angeles made it into the top five before some of the other metro cities,” said Crystal Chen, Zumper marketing manager.