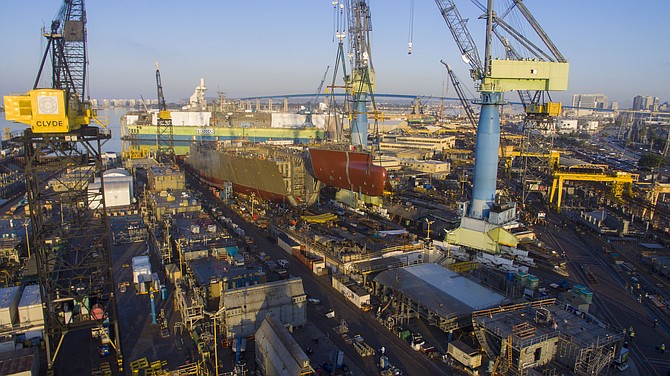 Congress spent the weeks before Christmas finalizing the 2020 Defense Department budget, opening the door to major purchases and greater flexibility in spending.

The fiscal 2020 authorization bill includes a new ship to be built by General Dynamics NASSCO: a TAO fleet oiler for the U.S. Navy. The bill calls for $607.2 million to go to the oiler program. The Pentagon had requested two ships and $981.2 million for the program.

The House passed the National Defense Authorization Act conference report on Dec. 11. The Senate followed on Dec. 17. Also approved was a separate Pentagon spending bill. President Donald Trump was expected to sign the bills on Dec. 20, as this issue was going to press.

The legislation was three months behind schedule. The 2020 fiscal year began Oct. 1. Since then the government has been working under stopgap bills that keep spending at 2019 levels and prohibited the start of new programs. The 2020 defense budget bills will give the green light to new programs.

The National Defense Authorization Act calls for a total budget is $738 billion. Some $71.5 billion of that sum is for overseas war spending.

Members of the military will get a 3.1% pay increase, giving them more spending power for housing and for other purchases. It was the largest pay hike in a decade.

The bill authorized an additional $653 million for Navy ship and submarine depot maintenance. Some funds are likely to flow to San Diego’s sprawling ship repair community.

The budget includes funds for more F-35 aircraft. Northrop Grumman produces electronics for the fifth-generation fighter in a northern suburb of San Diego.

The deal sets aside $500 million for Israeli missile defense. In the past, San Diego-based Kratos Defense and Security Solutions has done subcontracting work on Israeli systems, notably Iron Dome, David’s Sling and Arrow.

Cybersecurity funds in the budget are likely to flow to San Diego, since NAVWAR, the Naval Information Warfare Systems Command, is a major government cybersecurity agency. It is based in Old Town, with a lab on Point Loma.

The bill calls on the Pentagon to firm up plans for using fifth-generation (5G) wireless communications technology and to establish trusted supply chains for 5G microelectronics. Qualcomm Inc. will likely benefit since it holds extensive patents on 5G technology. It also produces 5G chips.

The authorization bill calls for $5.3 billion to help U.S. military installations recover from extreme weather and earthquakes (including the July earthquake in Ridgecrest, which damaged facilities at Naval Air Weapons Station China Lake). Southern California building contractors are likely to get a slice of that pie.

The 2020 authorization bill is notable because it establishes the U.S. Space Force as the sixth armed service of the United States.

In other defense contracting news, NASSCO began construction of its second new oiler, the future USNS Harvey Milk, on Dec. 13. It did so with a ceremony to cut the first piece of steel for the ship. The oiler, meant to refuel fighting ships while at sea, will be 742 feet long and displace 49,850 tons.

NASSCO is under contract with the Navy to build six oilers of the John Lewis class. The Navy is expected to order as many as 20 of the ships. Such an extensive program would keep NASSCO’s Barrio Logan yard working for a long time.